Your guide will pick you up at the hotel and tell you what to look out for when visiting the sumo rehearsal hall.

Reservations can be made one month before the date you wish to visit. If you do not find the dates you want, please contact info@truejapantours.com. 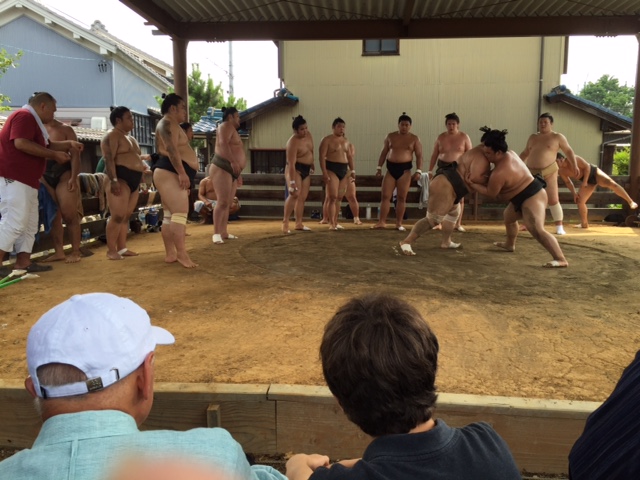 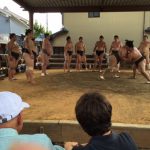 Watch a sumo lesson with a knowledgeable guide

Stroll near the rehearsal room

Sumo is a martial art in which men over 100 kilograms strike with full power. Observe the practice scenery from the very close to the ring.

A wrestler with a unique costume called "Fundoshi" will surround the rehearsal hall and ring. Exercise is performed in order from the lowest position. In the meantime, wrestlers do elaborate gymnastics, stretching and muscle training.

It is finally a mutual agreement. Just like in production, wrestlers hit, push and throw. The winner remains on the ring, and the loser leaves the ring. The next challenger will be on the ring and the conflict will begin. Fight 4 or 5 times as long as you keep winning.

The lesson gradually shifts to higher ranks. When the top wrestlers come out, the wrestlers who have been winning until now will lose. Sumo is a world of talent. It is a serious game where only those who have natural qualities and practice well can survive.

Therefore, the tour is not merely an interest-oriented sightseeing, but only to those who fully understand the sumo traditions and manners. Please observe the following rules for visiting the rehearsal room. If you cannot protect, you may be asked to leave on the way.

The guide will pick you up at the hotel and provide guidance on the rules and rules for visiting the rehearsal room in such a sumo room. Many sumo rooms are closed to foreigners, but we will try to find a room that can be visited and make it available. However, in many cases, sumo lessons cannot be confirmed until just before, such as going to another room or training in private.

◆ During the program, be sure to follow the instructions of the guide. We are not responsible for any accidents caused by not following the instructions of the guide.
◆ Please observe the following precautions when visiting the Sumo Room.
1. Sumo room is a place for serious competition, so give respect
. 2. Keep silent without moving
. 3. Don't speak privately
. 4. Do not stand on the ring or soil
. 5. Take off your shoes and sit in the tatami floor space
. 6. Take off hats and sunglasses
. Non smoking, eating and drinking prohibited
8. Photography only the state of the remains is sitting can not move the seat in a soluble
, more than necessary the use of the flash is not permitted
large camera of the motor sound, shutter sound is not allowed
9. 9. Turn off the mobile phone
. Avoid leaving as much as possible during a training visit.
Children under 12 years of age are not allowed to attend in principle because they often do not speak privately and do not move silently. When applying, please make sure to comply with the precautions on the parents' responsibility. If you cannot follow the precautions, you may be required to leave immediately at the discretion of the guide.
◆ Please understand that some rooms may sit directly between the boards.
◆ If religious reasons, physical or other conditions (disease, allergies, etc.) or children, etc. require special consideration due to age, etc., be sure to contact truejapan@ijcee.com in advance to see if they can be implemented. please.
Please note that we cannot guarantee the arrangement of programs purchased without prior inquiry.
◆ The supported language is English in principle. If you would like to speak Chinese, French, Spanish, German, Italian, Russian, etc., please apply to truejapan@ijcee.com as soon as possible . I will answer about the feasibility.
◆ Our business hours are from 9:00 to 18:00 on weekdays. Please note that inquiries outside business hours will be handled the next business day.
◆ The deadline for applying for this program is 10:00 am (Japan time) three business days prior to the implementation date.
If you apply after the deadline, please contact truejapan@ijcee.com in advance to see if it can be applied.
In addition, please contact us for availability during the busy season from March 20 to April 30, even before 4 business days ago.
Please note that arrangements cannot be guaranteed if purchased without inquiry.