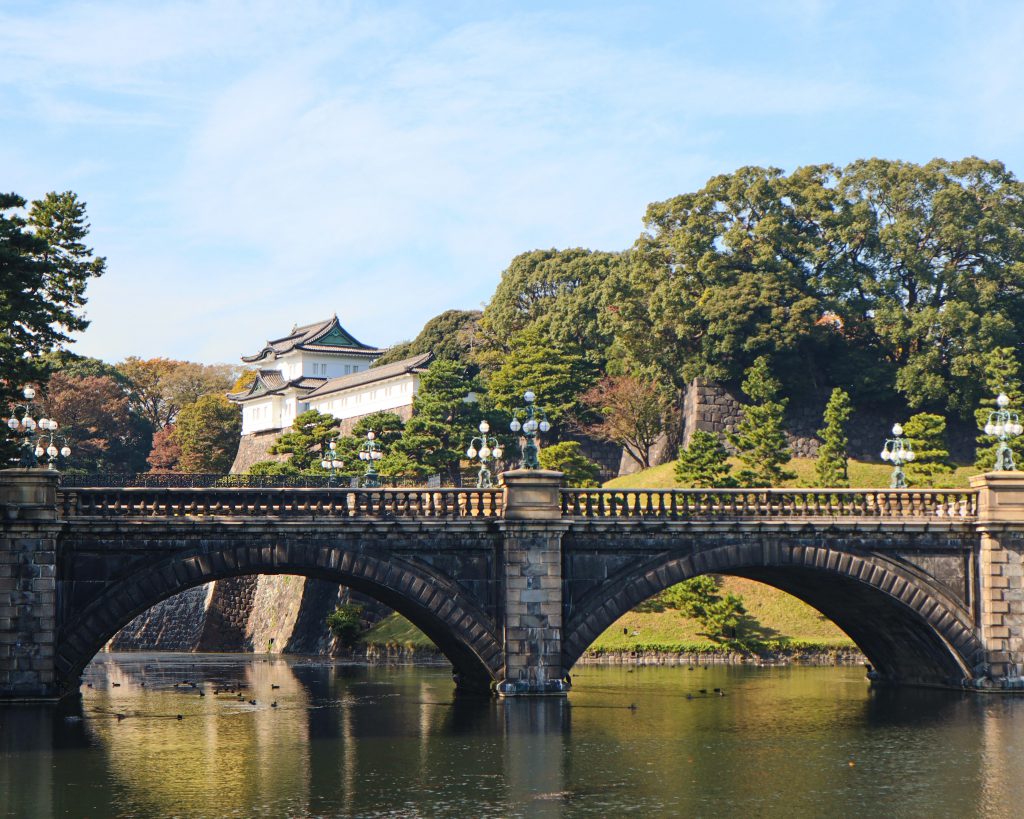 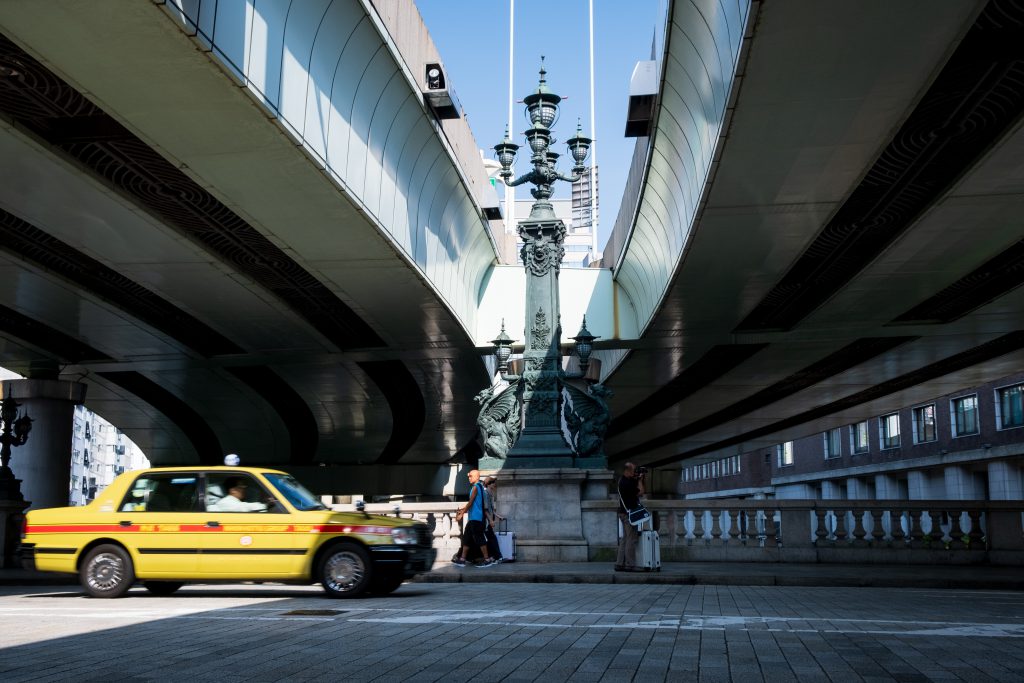 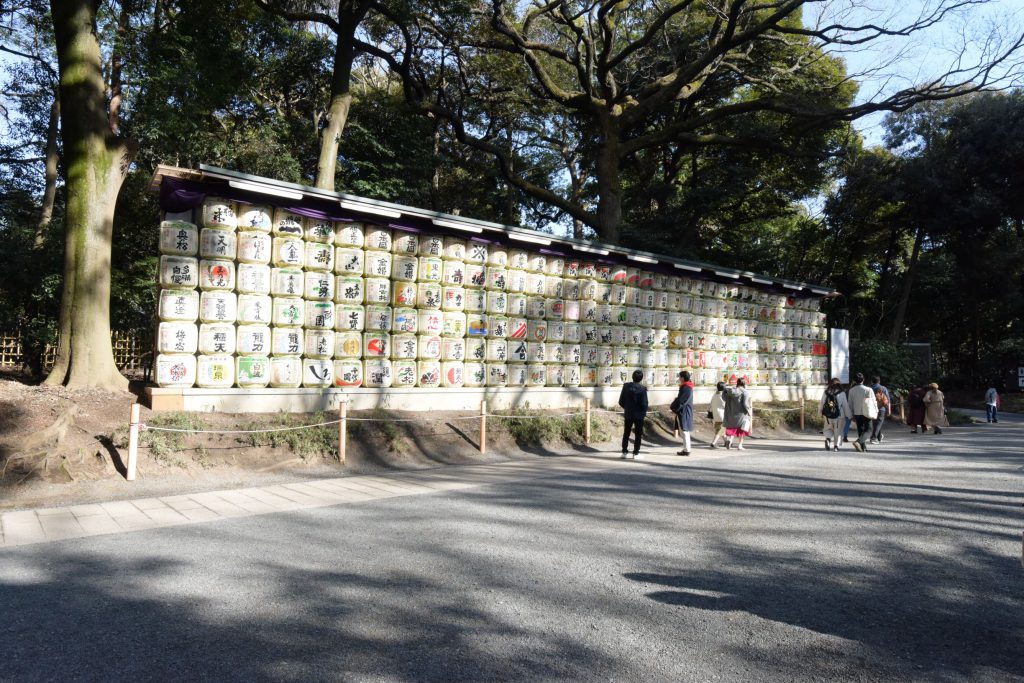 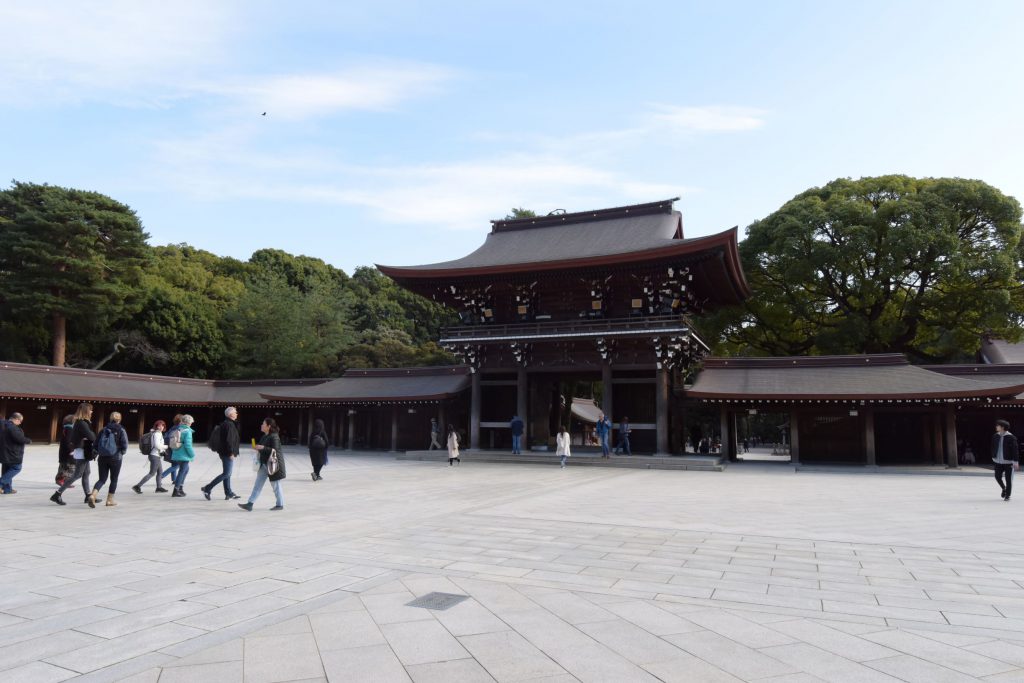 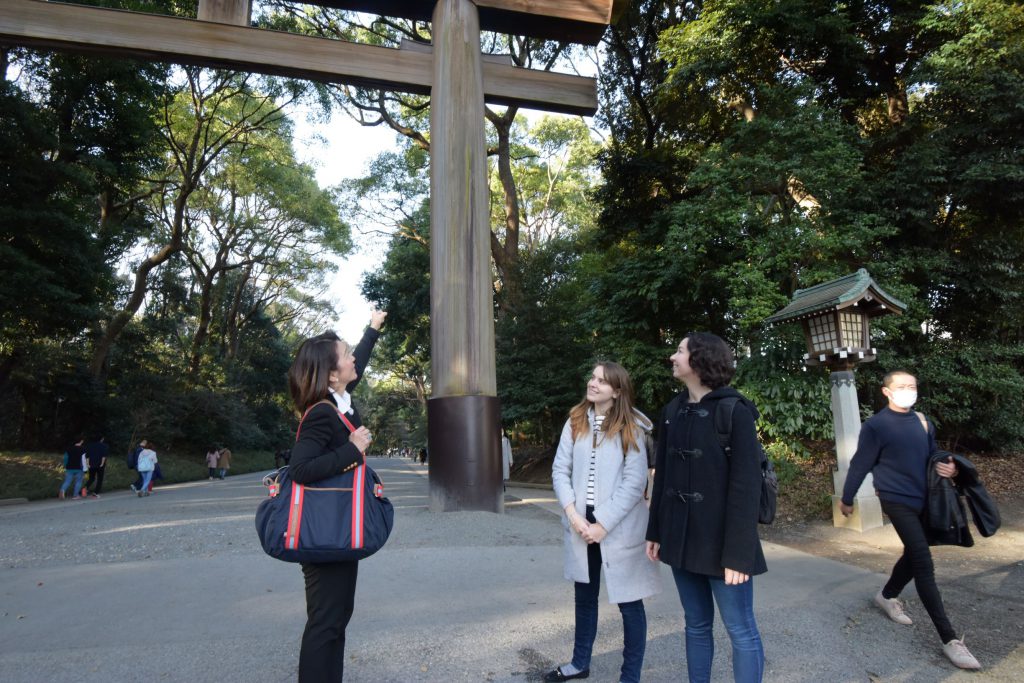 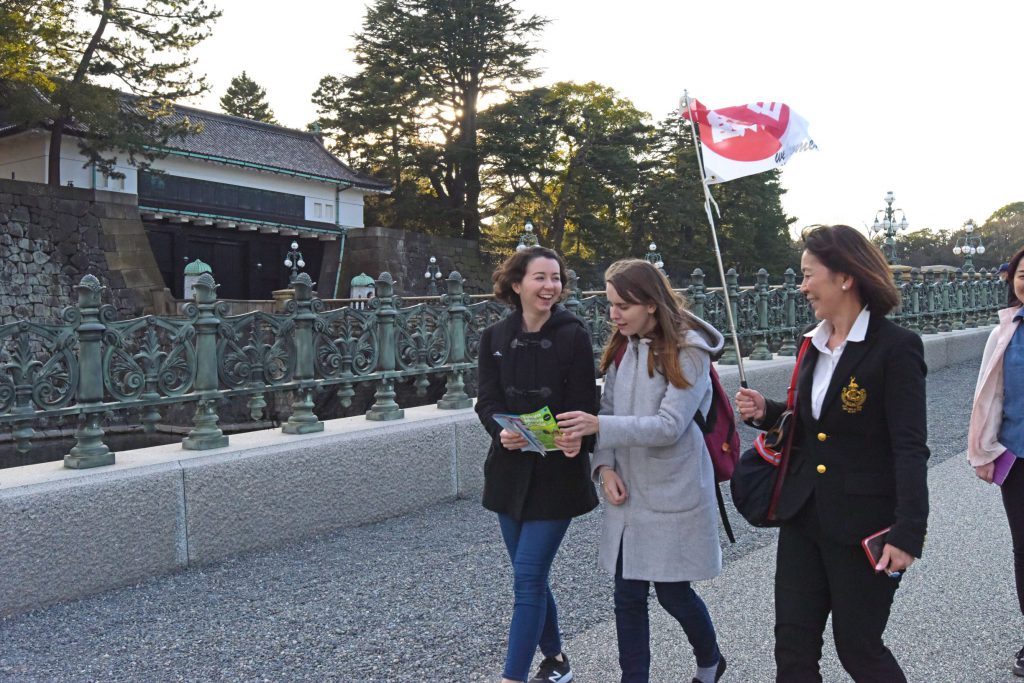 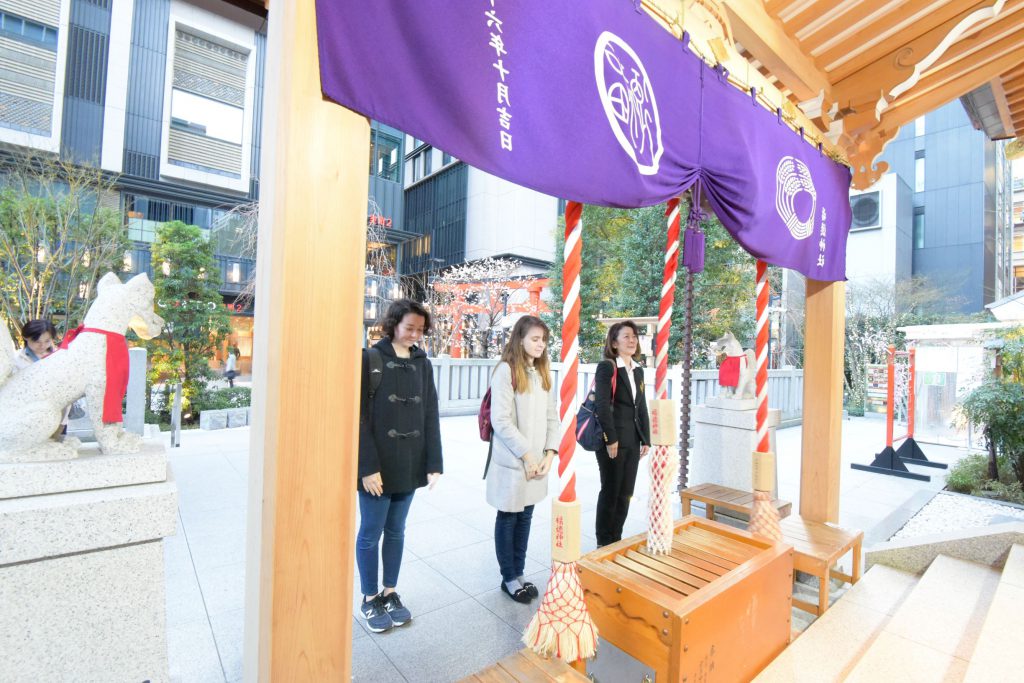 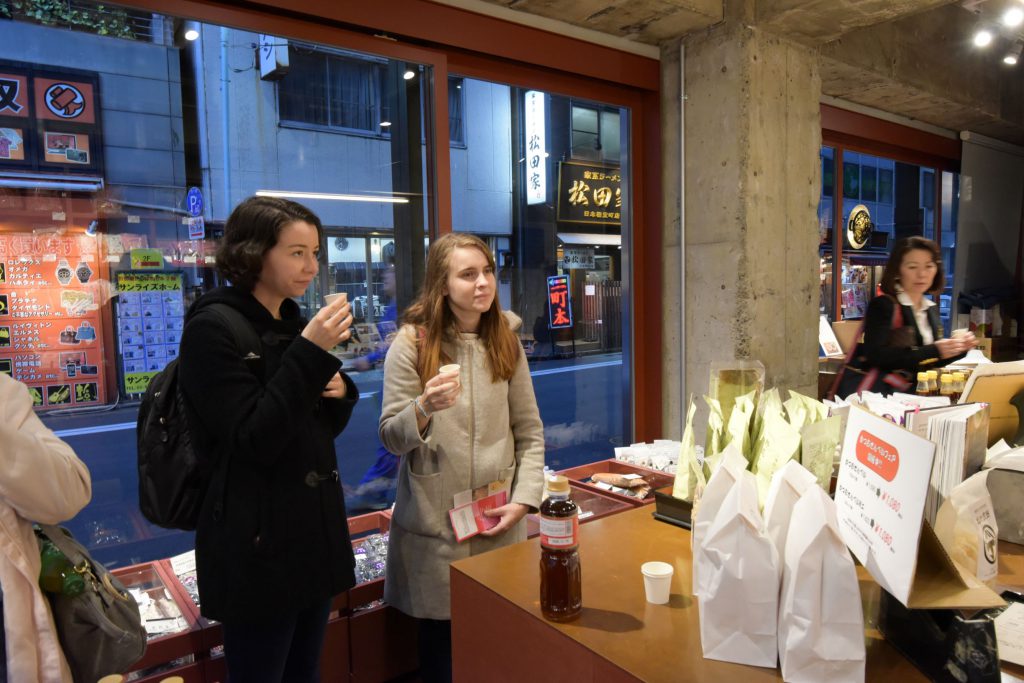 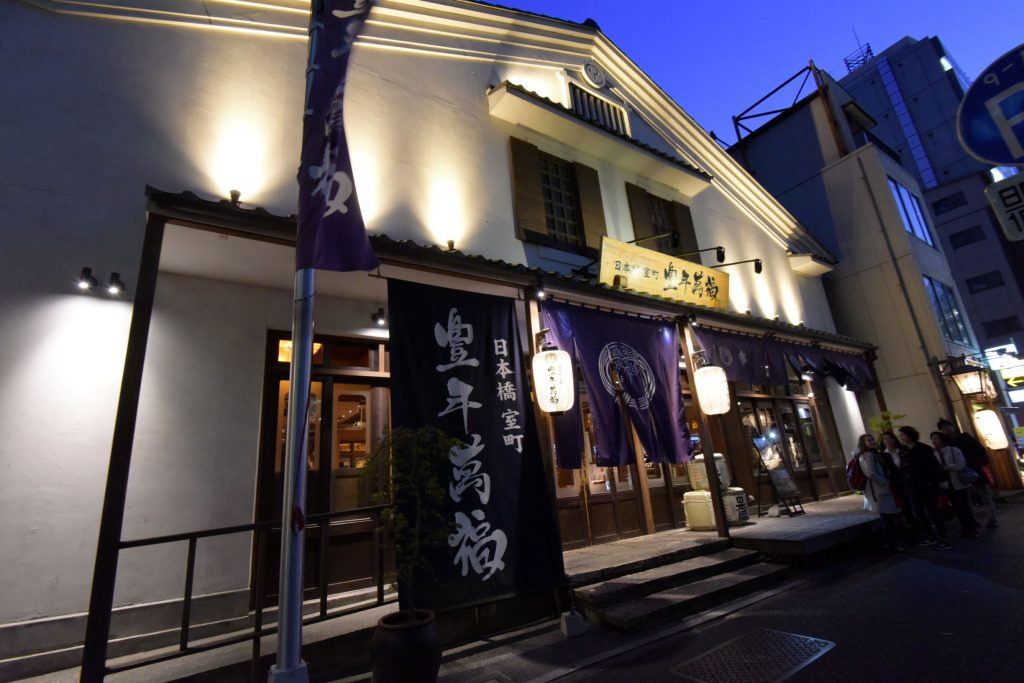 ◆ Discover the sacred grounds of Meiji Shrine with a nationally-licensed expert
◆ Learn the long history of Japan's Imperial family and see for yourself their main residence, the Imperial Palace
◆ Walk the streets of Nihonbashi, a district perfectly balanced between Japan's old and new

Our Tokyo Essentials Tour takes you around three of Tokyo's finest locations: Meiji Shrine, the Imperial Palace, and Nihonbashi*.

Meiji Jingu Shrine
The first stop on our tour is Tokyo's most-famous Shinto shrine, Meiji Jingu. Built in 1920, it is dedicated to Emperor Meiji (1852-1912) and his wife, Empress Shoken.

Emperor Meiji is highly regarded in Japan, having oversaw the many reforms of modernization that occurred in the late-nineteenth century, and Meiji Shrine was errected in his honor to commemorate his deified spirit.

Over 100,000 cedar trees were donated from all over Japan to create the shrine grounds and today it stands in 70 hectares (170 acres) of wild, otherwise untouched forest. This helps creates a long peaceful approach to the shrine's main holy buildings, flagged by two large wooden torii gates, some of the largest in Japan,

Guests of any faith are welcome to pray at the shrine, and omamori charms and ema votive tablets are available to purchase. On weekends, it is also common to see Shinto weddings occuring at the shrine and customers are on afternoon tour may be able to witness the daily ceremonal offerings to the deities.

Depending on time and interest, there is also the Meiji Jingu Museum and the shrine's Inner Gardens available to visit on the tour (extra fees apply). Guests can also visit nearby Omotesando, which is home to a number of popular shopping areas (Omotesando Hills, Cat Street, Oriental Bazaar), as well as architectural and art-related delights (The Prada Building, Gyre, The Espace Gallery).

As part of the tour, guests will visit the Nijubashi area of the grounds. This area contains a large park with many of the shogun-era moats and stone walls still in place. It is most famously home to the Nijubashi, two bridges that form an entrance into the main palace grounds. In Japan, for centuries this scene has been celebrated as being the most recognizable location in all of Tokyo.

The main grounds of the palace are closed to the public for most of the year, with the exception of January 2nd (for the New Year address) and February 23rd (for the Emperor's birthday).

Time depending, guests may also visit the East Gardens. These were part of Edo Castles main defence and several of the samurai-era guardhouses still remain. The park also includes a small Japanese garden, and a number of areas dedicated to seasonal flowers.

Nihonbashi*
Our final destination on the tour, Nihonbashi was named for the historic bridge that still stands in the district. During the Edo period (1603-1868), the bridge was kilometer zero, or the zero mile marker, for the network of highways that connected Tokyo with other major cities.

Tokyo's commerical center for centuries, many of the shops here have long histories, including Mitsukoshi Nihonbashi, the first department store in Japan. Though the skyscrapers have since risen, the district retains much of its cultural importance, and many traditional shops and museums remain in the area. Achieving a unique balance between old and new, the likes of Coredo Muromachi can be found in the area, a highrise dedicated to selling Edo period merchandise and showcasing ancient Japanese performance arts.

Once Japan's predominant financial district, Nihonbashi is also home to the Bank of Japan building, built in 1896, and deeply inspired by the European neoclassical architectural styles of the time.

On our tour, guests can visit all these places and more, as our guide informs you about the fascinating tales that make us this area.

*For those interested, we also offer Ginza as an alternative location to Nihonbashi. See "More Info" for details.

Ginza
We offer Ginza as an alternative location to the Nihonbashi section of the tour.

Ginza is famous for being Tokyo's pre-eminent upmarket shopping and dining district. It is home to many luxury department stories and shopping centers like Ginza Six and Ginza Wako, and almost all designer brands have their Japanese flagship stores here.

Not just a place for the rich and famous, Ginza is also home to Tokyo's main Kabuki theater, Kabukiza Theater, as well as number of quirky food spots like Yurakucho Gado-shita dining, a favorite among locals for its bustling atmosphere and countless quick-and-easy food counters.

If you wish to take part in this ammended tour, please let us know when booking.